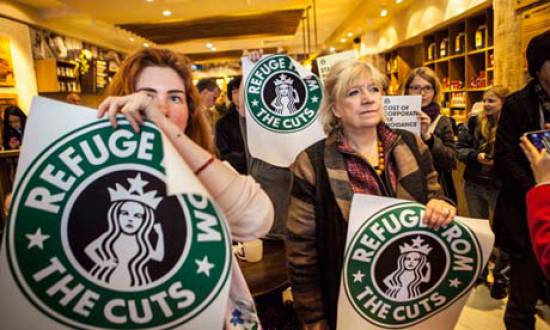 Tax campaigners targeted scores of Starbucks coffee shops across Britain yesterday, briefly disrupting business on one of the chain's busiest trading days as they sought to highlight the Seattle-based group's minimal contributions to the UK exchequer. Organisers from UK Uncut claimed to have targeted more than 40 shops – including Starbucks in Liverpool, Cardiff, Bristol and Shrewsbury – on the campaign group's biggest day of action to date. They were protesting against aggressive accounting measures that have allowed Starbucks to pay just £8.6m in tax since launching in the UK 14 years ago.

The action went ahead despite an unprecedented promise last week from Starbucks' UK boss, Kris Engskov, to overpay on the group's British tax bill by £20m over the next two years. "Our customers have been very vocal over the past six or seven weeks," he told Sky News. "This is clearly an issue which has struck a chord with the country."

A handful of stores, including two in London's busy West End shopping district, were briefly closed down around noon yesterday, and police threatened to arrest sit-in protesters for aggravated trespass. Organisers from UK Uncut had hoped to attract 1,000 protesters to Starbucks stores across the country.

At a flagship store just off Regent Street's busy shopping parades, about 40 activists and six children had joined the action.

The protest then moved to Vigo Street, another side road off Regent Street, where about 60 campaigners gathered among customers sipping lattes and herbal tea, chanting: "If you don't pay your taxes, we'll shut you down."

Zara Martin, 33, a protester who was handing out leaflets in the branch, said: "Everyone is being really quite cheerful and the response from passersby is great, they are all smiley and interested in what we are doing. It's very encouraging.

"Even if people don't agree, it's important that we're having the debate. I think the £20m over two years is a bit rubbish. It's like, wow thanks Starbucks, but actually why don't you just pay your full tax like everyone else has to?"

Customer Paula McCaully, 42, with her partner Ian, said: "I was hoping for a coffee, but [the protesters] are right, of course, and we will boycott and get our coffee somewhere else, I think. Good for them, coming out on a cold day to stand up for what they believe in."

The co-ordinated action against Starbucks was the latest in a string of protests which have thrown a spotlight on the complex and opaque world of tax treatments for multinational corporations. Others to be targeted have included Topshop and Vodafone.

Acknowledging the level of public feeling, in his autumn statement last Wednesday George Osborne promised to make international reform of corporation tax "an important priority" when Britain takes the G8 presidency next year.

Meanwhile, the top tax expert at the OECD, the body responsible for overseeing the tax rules, conceded that abusive — but legal — behaviour among multinationals was a big, and worsening, problem. Pascal Saint-Amans told the Observer there is a "large and growing gap" between where firms carry out most of their activities and where they record their profits.

He said tackling the holes in the international tax system had become a growing priority, even among those countries – including the UK – that had previously been sceptical about reform.

"What's new is that this has been acknowledged, recognised, and it has become a political concern."

The OECD's tax committee, which Saint-Amans chairs, is due to report to the G20 finance ministers in February with a set of proposals aimed at making the system fairer.

Saint-Amans urges G20 countries to work together towards an agreed system of defining profits and where they are made, instead of battling each other over who gets what share. "We are fighting to share a pie which is getting smaller and smaller, so let's work together to make sure the pie doesn't get smaller – and then we share it."