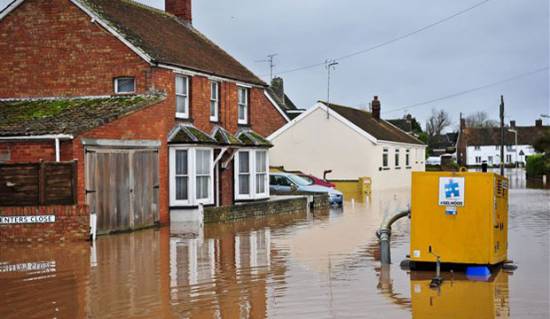 North-east England and north Wales are braced for possible flooding as the weather front which brought heavy rain to southern England moves north. There are about 250 flood warnings and 300 flood alerts in England and Wales, and two flood alerts in Scotland. This weekend 816 homes were flooded, mainly in south-west England.

Two people have died in the storms - a woman killed by a falling tree in Exeter and a man whose car crashed into a swollen river in Cambridgeshire.

Devon and Cornwall were particularly badly hit, along with Malmesbury in Wiltshire and Kempsey in Worcestershire.

Chris Fawkes from the BBC Weather Centre said there had been about 60 mm (2.5 in) of rain in south-west England over the weekend.

He said: "A weather front will slowly move across north England and north Wales on Monday, and it's here that we are likely to see some further serious flooding."

County Durham, Teesside, North Yorkshire and the Conwy area of north Wales are expected to be worst affected.

The Environment Agency has issued more than 250 flood warnings across England and Wales, which mean people should take action because flooding is expected. There are also 290 less severe flood alerts - indicating people should prepare for possible flooding.

The Scottish Environment Protection Agency, Sepa, has two flood alerts in place in the Borders and Edinburgh and Lothians regions. There are none in Northern Ireland.

Heavy rain and the related risk of flooding are forecast to continue until late on Tuesday.
'Shocking scenes'

In developments around the country:

Many roads have been closed due to flooding, particularly across the South West of England and the Midlands

Insurance companies are warning that a lack of progress in talks with the government could leave 200,000 homes without cover against flood damage

In Malmesbury, four people were rescued from their homes after what the mayor called the worst flooding there in 70 years

Residents of Kempsey, Worcestershire, criticise the village's new £1.5m flood defences which they say has made the flooding worse than in 2007

In Plymouth, Devon, about 60 people were evacuated due to safety concerns in a dozen locations and there were numerous reports of people being stuck in their cars

But Cambridgeshire Police said that the death of the 70-year-old man, whose car plunged into a river near Earith on Saturday night, was not weather-related.

David Cameron has talked of "shocking scenes of flooding".

In a Twitter message the prime minister also said the government "will help ensure everything is being done to help".

Earlier, environment minister Richard Benyon said he was "impressed with how the emergency services and Environment Agency have responded" to wet weather.

"What we learned from the floods in 2007 has been invaluable and what local authorities are doing ... working with the Environment Agency, with the emergency services, is certainly improving the situation - but if your house is flooded it feels pretty bleak," he said.

The minister added: "We are better prepared, but no-one is taking away from the misery that these floods have caused or the threat of further floods. You can only feel sorry for those people.

"Our estimate is that about 20,000 homes have been protected by flood defences that have built in the past few years."

But Stephen Gilbert, the Liberal Democrat MP for St Austell and Newquay, said the events of the last two days "should be a wake-up call for a government that needs to grip this issue and do so quickly".

"We know that flash flooding is increasing because of climate change and there's now little we can do to stop it, but the government must act to make sure people aren't left without insurance when the worst does happen," he said.