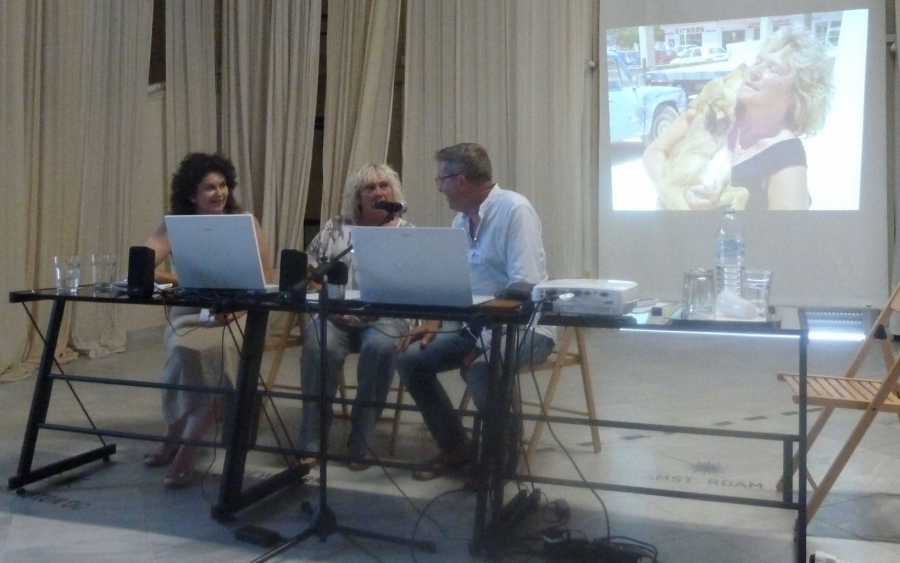 the First International Conference (Stray Paws Awareness) was held over the weekend 24th-25th June 2017 at the Ionian Centre for the Arts and Culture Metaxata, Kefalonia Greece.

Other speakers were as follows:
Dimitris Baboukis, (Fire Department Kefalonia),
Afroditi Theopeftatou (Parliamentary representative for Kefalonia
Panagiotis Kapatos (President of the Lawyers Association)
Evgenia Gkintoni (Psychologist, PHD in Clinical Neuropsychology)
Lefteris Markantonatos and Ireni Gasparatou from Outdoor Kefalonia)
Lefteris Psarros, Senior Veterinarian on Kefalonia
Irem Ebru Kuru (Chief operations Officer and Project Co-Ordinator of Turkish animal shelter)
Julian and Jean Spooner, (Fundraisers, Campaigners.)
John Ellett (Fundraiser, guest of Honour)
Maria Drogitis (Editor of the Ionian Echo Zakynthos) gave the Zakynthian perspective) Our neighbouring Island.
Mr Kekatos (Vice Mayor Tourism) spoke on behalf of the Mayor Mr Alexander Parisis
a Representative of the Kefalonia Argostoli Dimos (Council) was also there, answering questions about the Animal Welfare on the Island
Mrs Maria Marina Machado and Mr Dionisis Kappatos from ARK were invited but didn`t attend.
On both days, many attended and found the subjects fascinating. It was a unique opportunity to see others from different areas and backgrounds and exchange ideas about the future of animal rescue and care on the Greek Island of Kefalonia. For example, the Lawyer Mr Panagiotis Kapatos went through the new laws on animal welfare and stated what could be done to prosecute those carrying out animal abuse. The attendance of several animal lovers from Turkey was an inspiration too, to hear how they deal with things there. Everyone was impressed and humbled by the great work they do. Mr Lefteris Psarros gave a detailed clinical talk on Lieshmania to and the treatment and diganosis. The First Conference was a complete success and Mrs Vasiliki Leventakou is to be thanked for her great idea of the conference. Next year is already being planned with a much larger worldwide attendance expected. Also Sophia from the Ionian Centre together with her assistant laid on some great refreshments both days.