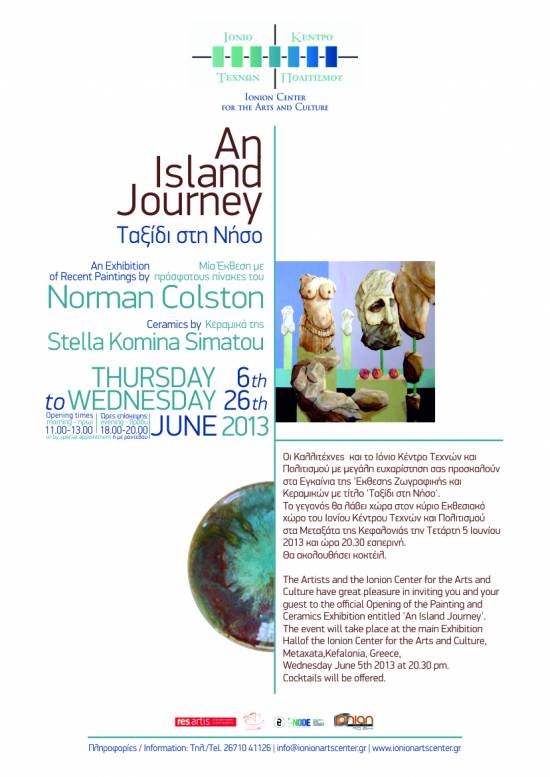 The Ionion Center for Arts and Culture is very pleased to announce a series of Visual Art Workshops which will take place at the Center during the month of June 2013.The Workshops will be led by Artist Norman Colston who is staging an Exhibition entitled "An Island Journey" during his Residency at the Center between 6th to 26th June.The Center will be opened from 11am to 1pm and 6pm to 8pm each day or by special appointment.

Originally from Dundee, Scotland and a graduate of Duncan of Jordanstone College of Art, Norman was the former Director of Dundee Printmakers Workshop. Since retiring from the post of Arts and Heritage Manager for the City of Dundee, Norman has returned to Painting, working from his studio on the Ionion Island of Zakynthos for the last six years.
He has travelled extensively in Greece for the last four decades and his colourful and vibrant paintings are clearly influenced by the Country, its Culture and its People. He follows the graphic tradition of artists as diverse as Moreau, Ingres, Klimt and Stuck who have been influenced by both the myth and reality of ancient Greece. His imagery investigates the classical proportions of the human figure through his personal observation and recording of life models and mannequins.

Fragmented marble, eroded bronze sculptures and ceremonial ceramic pots along with the symbolism of the fruits are central to his visual vocabulary. The paintings seek to stimulate a connection between artist, painting and viewer through direct access to the work.

The Workshops which are aimed at a wide cross section of the Kefalonian community will create an opportunity for personal and group exploration of basic research, visual stimulation, observation and recording. This will be achieved through the use of a number of drawing and painting materials leading to a positive outcome for the individual participants.

Additionally there will be an Open Access Studio Drop In Sessions on the above days between 11am and 1pm. Norman will be happy to discuss his work with all interested parties on an informal basis at those times or by appointment.

The exhibition content will be complemented by a selection of Ceramics by Kefalonian artist Stella Komina Simatou.
Ceramicist Stella will also be undertaking a two- part Workshop on the creation of Primitive Bowls.

The first part will be the Making of the bowls at the Center on Tuesday 4th June followed by the Loading and Firing of the Kiln on Monday 17th June at Stella's Studio. The total cost for this will be 12 Euros per person and take place between 7pm – 9pm on both evenings.

Certificate of participation will be offered to all participants